You are here: Home / Featured / Theatre review: Priscilla Queen of the Desert 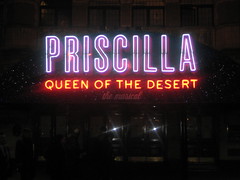 Priscilla was FUN, FUN, FUN! This was a truly euphoric show.
The first half burst into your existence like a multi-coloured, spangled extravaganza that assaults all your senses. The costumes were so creative and extravagant. The Tina Turner impersonator was just spot on. Lots of laughs and the expected drag/ gay gags, but these work quite well. There is a bit of sentimentality in the second half but just enough. The score was all the memorable tunes of that time with lots of the audience singing and clapping along.
The Bus was the star of the show and the first time a west end audience applauded the arrival of a bus on stage, I think. Must say, Jason Donovan was the weakest link and someone should give him a lesson in walking in heels. The other 2 leads, Tony Sheldon as transsexual Bernadette and Oliver Thornton as Adam/Felicia were sensational.
The evening ended all too soon with an expected standing ovation. Big letdown was that there wasn’t the Mama Mia like show at the end for a bit of a boogie.
Fantastic cast, fantastic show. You can’t help but come out of this show uplifted. Go with a bunch of friends and you will have a great time. (Tip- Cheaper tickets if you buy in a group.)
At the Palace Theatre, Shaftesbury Avenue.
Written : Book by Stephan Elliott and Allan Scott, based on the 1994 movie.
Directed : Simon Phillips
Cast : Jason Donovan (Tick – Mitzi), Tony Sheldon (Bernadette), Oliver Thornton (Adam – Felicia), Clive Carter (Bob)
Synopsis : Drag queen Mitzi, and friends Felicia and Bernadette make their own personal journeys of discovery as they go across Australia from Sydney to the outback, in a battered old bus named Priscilla , to perform their show – singing their way through disco songs.

Proud Mum Kate, took these adorable pics of Princess Charlotte and shared it on twitter. Wearing a dress and a little cardigan, she is setting new baby style … END_OF_DOCUMENT_TOKEN_TO_BE_REPLACED

Fashion wise, which is the most popular? I tend to favour the most common one, the loop. It's easiest to do and I dont have to remember any complicated steps. I found this video on how to tie a scarf in 16 ways. I might try a couple of the different variations … END_OF_DOCUMENT_TOKEN_TO_BE_REPLACED

Here is a view of St Paul's Cathedral on a sunny day against a lovely blue sky. … END_OF_DOCUMENT_TOKEN_TO_BE_REPLACED

Being such a massive tennis fan, the chance to be on the same court as tennis sensation Martina Hingis can't really be ignored. The middle Sunday of the Wimbledon fortnight finds us at the Wimbledon Club (opposite the AELTC) for a day of tennis at the … END_OF_DOCUMENT_TOKEN_TO_BE_REPLACED