I love these Marvel comic films. Captain America: The Winter Soldier is the latest instalment of this glitzy Avengers franchise.

The first scene introduces Steve Rogers (Chris Evans) as the nation’s hero, Captain America. You get to see his spectacular physique with the overdeveloped upper body and then you see the pretty boy face. It somehow doesn’t go. He is said to be a super talented actor so I look forward to seeing him in other roles that will allow him to show off his talent a bit more.

In the film, Captain America has been brought back to life after being frozen in the 1940s. The action sequences are of course highly digitalised. Where there is fighting, the hero uses his shield like an oversized discus with great aplomb. Not quite Ironman with lots of fancy gadgetry but thrilling enough.

Robert Redford, post plastic surgery, plays the baddie. He somehow doesn’t exude the evil that his role requires. Love Robert Redford but he doesn’t look like himself anymore.

The plot of this film is more gritty than the other films of this franchise. They get political and and instead of duelling with a demented baddie, this film deals with real world contemporary issues like national security and terrorism.

Being Hollywood, in the end, of course good prevails.

Proud Mum Kate, took these adorable pics of Princess Charlotte and shared it on twitter. Wearing a dress and a little cardigan, she is setting new baby style … END_OF_DOCUMENT_TOKEN_TO_BE_REPLACED

Fashion wise, which is the most popular? I tend to favour the most common one, the loop. It's easiest to do and I dont have to remember any complicated steps. I found this video on how to tie a scarf in 16 ways. I might try a couple of the different variations … END_OF_DOCUMENT_TOKEN_TO_BE_REPLACED 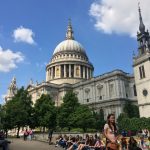 Here is a view of St Paul's Cathedral on a sunny day against a lovely blue sky. … END_OF_DOCUMENT_TOKEN_TO_BE_REPLACED

Being such a massive tennis fan, the chance to be on the same court as tennis sensation Martina Hingis can't really be ignored. The middle Sunday of the Wimbledon fortnight finds us at the Wimbledon Club (opposite the AELTC) for a day of tennis at the … END_OF_DOCUMENT_TOKEN_TO_BE_REPLACED