You are here: Home / Featured / Blizzard shuts London down 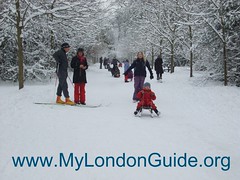 It started snowing quite heavily on Sunday night in London, very unusual for February. Monday morning dawns and London is blanketed with about a foot of snow.

As we don’t normally get much snow in London, the infrastructure is not set up to deal with snow so the transport system completely died. Today, there were very few tubes running, no trains, no buses. Heathrow running on long delays and Terminal 5 closed for most the day.We also saw major delays at other airports in London leaving lots of passengers stranded. (Most passengers will not get much compensation for this unless their travel insurance covers it.)

As most people did not have to work today, 6 million Londoners were left to play in the snow. Here are some scenes from around London.

Proud Mum Kate, took these adorable pics of Princess Charlotte and shared it on twitter. Wearing a dress and a little cardigan, she is setting new baby style … END_OF_DOCUMENT_TOKEN_TO_BE_REPLACED

Fashion wise, which is the most popular? I tend to favour the most common one, the loop. It's easiest to do and I dont have to remember any complicated steps. I found this video on how to tie a scarf in 16 ways. I might try a couple of the different variations … END_OF_DOCUMENT_TOKEN_TO_BE_REPLACED

Here is a view of St Paul's Cathedral on a sunny day against a lovely blue sky. … END_OF_DOCUMENT_TOKEN_TO_BE_REPLACED

Being such a massive tennis fan, the chance to be on the same court as tennis sensation Martina Hingis can't really be ignored. The middle Sunday of the Wimbledon fortnight finds us at the Wimbledon Club (opposite the AELTC) for a day of tennis at the … END_OF_DOCUMENT_TOKEN_TO_BE_REPLACED